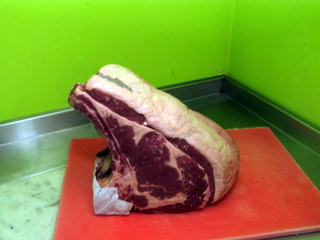 Suffolk red poles feature among the cattle grazed on local meadows in and around Cambridge.

Having collected the rib of beef late last week, I decided to delay cooking it until Sunday â€“ it’s weight was a mere 4kg, and it had 2 bones on it, cut short. When my wife saw it she commented on how it looked quite unlike any beef meat she had ever seen in a Superstore,

On the morning I took it out of the fridge to come to room temperature before roasting it for 2 hours, and letting it stand for another half an hour.

Overall it was fantastic in taste, texture, flavour and smell, and well worth the effort of cooking it with care.