CUCA always holds a Chairman’s Dinner during that Chairman’s term. This one was held for the chap in the title, and began with a Champagne reception in the Old Kitchens of Queens’ College, after which, we popped across to the Ancient Dining Hall (as I like to call it, as they have a new one, too, and the decoration in there is truly ancient).

After finding our places, we began with a charcuterie platter of smoked and cured meats, accompanied by a Tuscan-style pazanella salad, unless you’re one of those vegetarian wimps, of course, in which case you got endive salad. 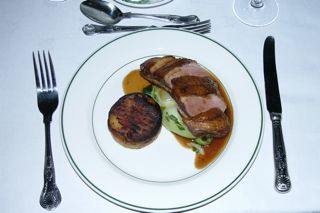 The main course soon followed, and was magnificent (as you can see from the photograph above). It was grilled breast of barbary duck, and alongside came fondant potatoes and wilted greens, all covered with a delicious port wine sauce. For those that prefer boring food (no names mentioned, such as Victor Vavatch or Veronica Victoria), there was sweet potato and butternut squash crumble with what was described as ‘tarragon brioche gruyere’ (make of that what you will) and walnut crust.

Dessert, as you can see, was sticky toffee pudding with toffee sauce and vanilla ice cream, largely drunk with the college port. Throughout the rest of the meal, we were served La Gioiosa Pinot Grigio from 2007 and Plan de Dieu Promenade du Papes from 2006, the latter of which was highly enjoyable and the former of which was less so.