When I was in America recently I popped over to Paris for a spot of dinner with Chad and his girlfriend Missy – her account of the dinner, with plenty of food-porn-pictures can be read here.

The Ashby Inn is in Paris, Va – just over an hour’s drive from DC and in the heart of Virginia wine-land.

We ordered cocktails and amuse bouche to kick off with, I selected a tanqueray 10 martini and some cured ham while we leisurely wrestled with our menu choices.

I plumped for the brussel sprout starter which was really phenomenal and included some ingredients I had never seen before, It was deliciously fresh. The sprouts were uncooked with the leaves removed and separated like a mini iceberg lettuce. I followed the sprouts with slow cooked (sous-vide for 3 days apparently!) lamb, which was melt in the mouth. The desert was a slight disappointment, but without dairy this is the story of my life *dramatic sigh*. 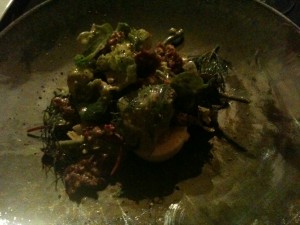 The wine really was a knock-out – the 2008 Linden claret. I tried to find the wine in a store but alas time ran out before I had to run to the airport.

The meal, thanks to American value more than the exchange rate, cost much less than I would have expected to pay in London, although the custom to tip at the 20% mark closed that gap somewhat.